You are what you drink - Understanding Hyponatremia - 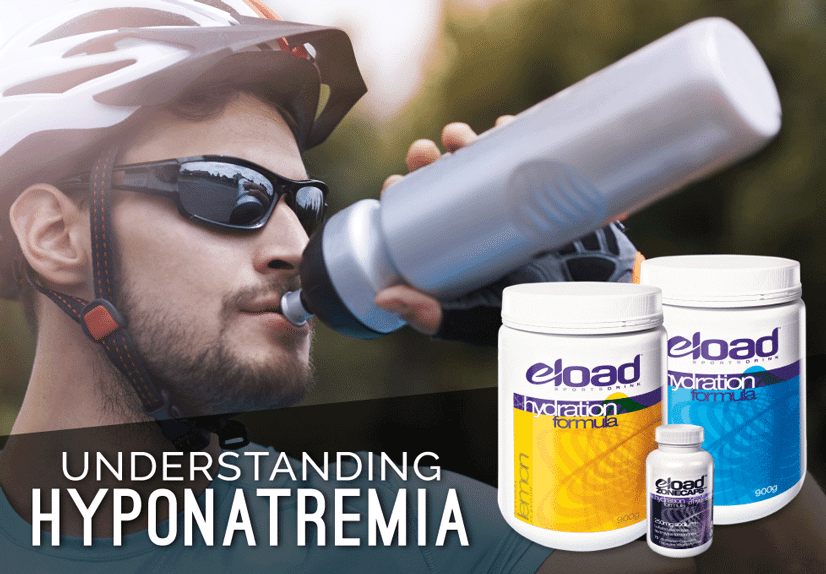 You are what you drink – Understanding Hyponatremia.
Dr. Douglas Stoddard
“Inside Triathlon”

Hyponatremia, or reduced concentrations of sodium in the blood, has been reported in up to 20 percent of Ironman-distance participants. Symptoms of hyponatremia can include nausea, muscular cramping, stomach upset, vomiting, dizziness, seizures and delirium. Coma and even death may result. When hyponatremia does occur in triatheletes, it usually happens during long races, especially if these events are associated with relatively high heat and humidity. However, susceptible individuals may experience hyponatremia even in short-course events.

Since a teaspoon of salt contains about 6 grams, the amount of salt lost equals about four to six teaspoons. You might not think this seems like much, but if you consider that a 140-pound person has only about 40 grams (close to seven teaspoons) of salt in his/her blood to begin with, you start to get a feel for how significant these losses can be.

When ingesting a sports drink, it is the concentration of sodium in the drink that is the most important consideration.

As can be seen with these numbers, there is not much difference between normal concentrations of sodium and severe hyponatremia – a difference of about half a gram of sodium per liter of blood, or 1/12 teaspoons per liter.

STRIKING A BALANCE
If you’re racing in heat and humidity, it is essential to maintain both adequate hydration and normonatremia (normal blood sodium levels). But unfortunately this is often easier said than done as these functions are often in competition with each other.

When we become dehydrated, pressure-sensitive receptors located in our carotid arteries, called baroreceptors, sense a drop in our blood pressure. This in turn sets off a variety of counter-measures, one of which is the release of Antidiuretic Hormone (ADH) from the pituitary gland in our brains, which tells the kidneys to conserve water, making our urine more concentrated and reducing urination.

Some triathletes experience shutdown in their ability to urinate during Ironman races, and this mechanism likely plays a major role in this phenomenon. The net effect is an increase in hydration and blood pressure. Unfortunately, this extra water reabsorbed by the kidneys contributes to hyponatremia.

Hyponatremia, on the other hand, has the opposite effect to dehydration in that it leads to reductions in the release of ADH, thus allowing the kidneys to excrete more water, making our urine more dilute and increasing urination. Urinating more water will result in an increase in sodium concentration in the blood. Unfortunately, the loss of this water leads to further reductions in blood pressure.

Some triathletes experience increases in urination of especially dilute urine after an Ironman, which is the body’s way of correcting hyponatremia that evolved during the race. In truth, the regulation of water and sodium is much more complex than what I have presented here.

However, for the purposes of this discussion, two competing physiological processes are trying to maintain an optimum internal environment – one corrective process improves dehydration, but potentially makes hyponatremia worse, while the opposite occurs when trying to improve hyponatremia.

So, which process wins when both are competing? Suffice it to say it is probable that dehydration plays a more significant role in stimulating protective responses, which may have a role in perpetuating hyponatremia.

WHAT COMES OUT MUST GO IN
For optimum health, replace what is lost at the rate of loss. For example, if your daily energy expenditure is 2000 calories, and assuming you neither want to gain nor lose any weight, you must eat 2000 calories per day to balance your losses. This principle should be applied to water and sodium balance.

As mentioned earlier, your sweat contains anywhere from 700 to1200 mg of sodium (1.75 to 3 grams of salt) per liter. Losing about one liter per hour means you need to replace both the water component of one liter and the sodium component of 700 to 1200 mg per hour.

If you strive to replace your water and sodium losses at the rate of loss, your odds of developing hyponatrernia and dehydration will be drastically reduced. This is best facilitated if you consider these two needs as totally separate.

Example: Calculated from his before and after weights over the course of many training sessions, Scott knows that he loses about one liter of sweat per hour in conditions such as those predicted for his upcoming Ironman. He also knows that his sweat is usually quite concentrated, leaving a lot of salt stains on his clothing. He guesses his sweat contains sodium at the higher end of the normal range, about 1200 mg per liter, so with a sweat rate of one liter per hour, ideally he should replace 1200 mg of sodium per hour. Scott’s favorite sports drink contains only 300 mg of sodium per liter. Each gel he is consuming contains 50 mg of sodium, and each bar he consumes contains 100 mg of sodium. The following table summarizes Scott’s water and sodium intake per hour:

Based on this basic Ironman diet, Scott ingests enough water every hour, but his sodium intake is below what he actually needs – about 650 mg per hour short, considering he needs approximately 1200 mg per hour. Multiply this by 12 hours, and you have 7.8 grams of sodium, or 19.5 grams of salt. Most likely, Scott is headed for the med tent with severe hyponatremia.

OVERHYDRATING
You can overhydrate, and if you do so with dilute sports drinks failing to match the rate of sodium loss, you may run into trouble with hyponatremia.

Using the strategy of separating water from sodium ingestion to figure out needs, and replacing each as they are lost, your risk of hyponatremia will be drastically reduced.